Ad Gefrin, the ancient Anglian palace site rediscovered via aerial photography, is the third stop on our Wooler area geocaching day trip.  While there we watch a glider’s quiet turns through the wind as it heads home.

It’s 14 June and we’ve had a rewarding afternoon so far.  After finding Weetwood Moor (Cup & Ring) (GC27767) and Weetwood Bridge (GC1RA3Z), we drove on to the hamlet of Yeavering on Northumberland National Park’s northern border in search of Ad Gefrin (GC1HGBD), another  geocache designed to bring people to places of interest in the area.  This one brought us to one of the most important historical sites in the region, a point on the B6351 between Yeavering and Yeavering Bell to the south and Ad Gefrin to the north. 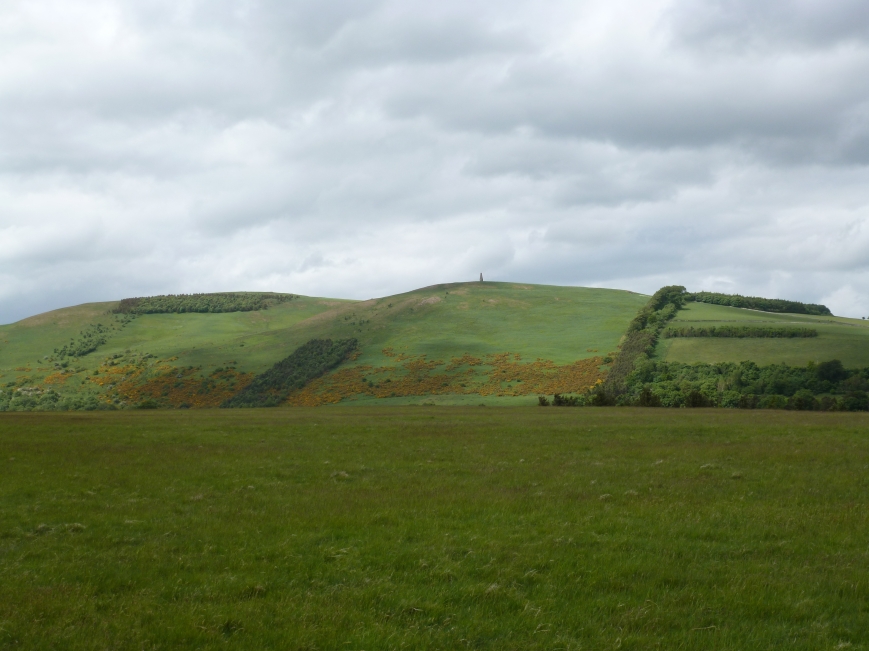 a view north across Ad Gefrin from its southern edge

Ad Gefrin’s full historical significance came to light when Brian Hope-Taylor unearthed an ancient palace and accompanying buildings on a sandy knoll between the known ancient hillfort of Yeavering Bell to the south and the River Glen to the north.  His excavations at Ad Gefrin between 1952 and 1962 revealed most of what we know about the site today.  Ad Gefrin was almost certainly the residence of King Edwin, who reigned in the area later known as Northumbria from AD 616 until his death in AD 633.  Evidence of other human activity in and around Yeavering and Ad Gefrin dates as far back as approximately 5000 years ago.

While dagdvm and I searched for and found the geocache placed on the site Hope-Taylor discovered, we looked up saw a glider being towed to altitude off to the northeast.

We watched the pilot release the tow line and circle over the area for many minutes before turning the glider towards its home at the Borders Gliding Club field in Milfield, just over the ridge to the north of Ad Gefrin.

Neither of us knew anything about Yeavering, Yeavering Bell, Ad Gefrin, or the Borders Gliding Club before we went looking for this geocache.  That’s one of the best things about geocaching — everything one can learn about and enjoy along the way.   Many thanks to geocacher Phil100 for placing a geocache at this beautiful and historic site.

Please see “Daddy, Why Is the Sun Shining in Manchester?” for an overview of our June 2013 UK geocaching days.